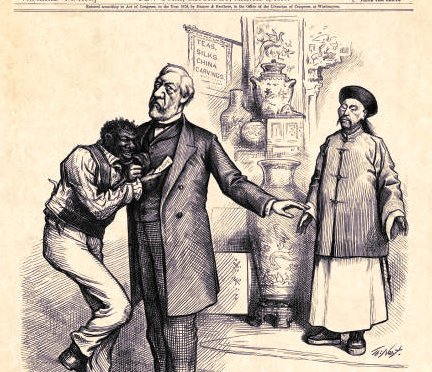 On March 8, 1979, Nast placed James G.Blaine front and center Harper’s cover with The Civilization of Blaine.  A distinguished Blaine is seen at ground level receiving the attention of a subordinate, subservient African American. The black man’s posture is weak. Attired in country clothes, he crouches and cowers with a defensive grin on his face. He has the demeanor of a beaten dog approaching his master. He does not look the white politician in the eye. In his right hand, he clutches “A Vote” and offers this almost obediently to Blaine.

His right leg is drawn up, nervously rubbing the front of his right foot against the back of his left trouser, as if to polish it in the presence of greatness. Blaine’s left shoe tramples on the “Burlingame Treaty.”

As with most of Nast’s villains, Blaine’s face is not distorted or caricatured. Nast wanted him recognized and consistently depicted Blaine’s facial features realistically in his cartoons.  Like Tweed, Nast rarely deviated from a famous face once it had been established as a character.  His victim’s bodies, on the other hand, felt the weapon of distortion, but the face never!

In the background and elevated by a storefront step, a Chinese merchant emerges from his store.  Nast assigns dignity to this merchant. Nast introduces him as a Chinese diplomat, often referred to as  “John Confucius” or “John Chinaman” (the terms are interchangeable) in Nast’s cartoons.  It is an important distinction to note, that in Nast’s catalog of images, he pulled from his personal supply of default or stock characters who served a specific purpose.

Some might argue that “John” perpetuates a stereotype. In almost every instance where John appears, he does so in the same manner as Columbia or Uncle Sam, figures in Nast cartoons who represent either a government or national virtues. They are figures, whom by their expression or stance, often provide admonition or displeasure to the scene of injustice they are witnessing.  Nast could and did draw Chinese in any number of ways, and some of these are not flattering.  “John Chinaman” or “John Confucius” never really changes. His inclusion is purposeful. He is Nast’s relied-upon figure of dignity and outrage toward injustice.

The merchant assumes the elevated position in the drawing.  He is on the right, figuratively and morally. The injustice is on the left. The merchant is not shabbily dressed.  Interestingly, his hair, though long, is not braided into the queue, which factors in most of Nast’s cartoons of the Chinese. It is a subtle change for Nast to utilize. John is wearing a hat, a crown if you will, a piece of clothing that imparts respect, formality, and distinction. This further validates his dual role as a local merchant and as a representative of the Chinese. His people will be affected by adherence to the treaty that Blaine is obligated, as a U.S. Senator, to protect.  John’s arms are slightly outstretched as if encountering a surprise and ready to protest.  At the right of his storefront is a sampling of the wares — the teas, silks, china and carvings that had been for years,  favored art pieces of in Caucasian homes, bought and placed in homes “as signs of American aesthetic acumen and refinement” (Lenore-Chen 2).

Blaine senses the approach of John Confucius and waves him back with an extended left hand.  Blaine’s face is slightly cocked, and his eyes avert to the left as the Chinese merchant approaches from behind. Blaine’s expression is clearly one that intends to discard the Chinese merchant completely, as if to say, “Stay where you are–do not interfere here.” Nast speaks for John Confucius (for his mouth is drawn shut) so the audience can ponder his question placed in the caption, “Am I not a Man and a Brother!”

The cartoon and caption echo an earlier post-Civil War illustration Nast had drawn to advocate on behalf of and provoke emotion for Negro suffrage. Nast’s 1865 illustration “And Not This Man? “shows Columbia resplendent in American symbolism, arguing for the admission of a wounded Negro Union soldier into the American family.

Nast’s experiences and other images he drew on behalf of civil rights had a cumulative and successful effect. “Nast’s sensitivity to the rights of minority Americans would extend to others besides the embattled freedmen” (Keller 107). Nast would never draw African Americans again with the same dignity as this early drawing.  However, by evoking the same sentiment, this time on behalf of the Chinese, Nast might have hoped that his pen would wield influential once more on the national consciousness.

These aspirations were misplaced.  With each election in the 1870’s, the Democratic Party gained inroads and influence, courting the votes and catering to the demands of a growing white, male labor force comprised of first and second- generation immigrants. “The loss of Republican purity was a loss of Republican power” (Keller 281). Politicians and public sentiment were drifting away from Nast. But Nast and Harper’s Weekly would not give up on minorities. “The Chinese and the Indians, in particular, came under his protective wing” (Keller 107).

He writes, “symbols were an economic language in a frontier society where literacy wasn’t always available currency. Whether borrowed from nature, religion or mythology, they went a long way toward simplifying polemics through an appeal to a higher order “(Dewey 11). No one used symbols more effectively than Thomas Nast.

Indeed, prolific use of symbols can be viewed as a method of stereotyping an individual, group, or race by way of reduction their essence to a single image or metaphor. In Nast’s era, creating a symbol to represent a larger whole or entity, formed from a necessity of time.  Hand drawn images needed to be meticulously carved, yet rendered quickly for delivery to the printing press. Nast often contributed several drawings to a single weekly issue. He needed to have stock images that he could quickly reproduce and incorporate into his scenes.

Nast consistently repeated symbols for practical purposes. This can be interpreted as a means to create and promote a stereotype. The use of symbols often reduces or dehumanizes individuals. In modern political cartoons, Garry Trudeau, creator of Doonsebury, chose to depict U.S. President George W. Bush as a talking hat, and California Governor Arnold Schwarzenegger as a strongman’s fist. Once adopted, political artists like Trudeau rarely deviate from these symbolic devices once they are established.

Nast followed the lead of British cartoonists, especially John Tenniel, artist for Punch magazine, who used female goddesses to personify of governments or countries. Britannia, Columbia, Hibernia were frequent substitutes for England, America and Ireland, respectively. They almost always appear as positive, regal actors, sometimes sympathetically as victims. While Nast did not invent Uncle Sam, he employed the fictional figure as his favorite, and occasionally psychologically tortured symbol of the American government (whereas Columbia and her sisters Liberty and Justice) almost always stoically represented American values.

Nast created “John Chinaman,” or “John Confucius” as his symbol for the Chinese nation or Chinese government. When they appear in Nast cartoons, they should be assessed in the same light as Columbia, or Uncle Sam. Calling someone a “Chinaman” today is a negative term, but it was not used negatively in Nast’s cartoons. His “John Chinaman,” alone or as part of a diplomatic delegation, are drawn in their native dress and usually with a cap. Nast did not exaggerate the features of “John Chinaman” and he typically imbues him with wisdom and dignity.  Oftentimes, Nast includes “John” or his Chinese representatives with references to their ancient culture. Nast often includes them as a foil against western representations of civilizations. Although historian John Kuo Wei Tchen has concerns with some of Nast’s depictions, he concedes Nast’s efforts to defend the Chinese and calls the “John Confucius” character “unambiguously noble” (203).

Though animal symbolism could be used to dehumanize a subject, Nast frequently used animals in striking manner.

Nast’s Tammany tiger represented a corrupt political machine, was nevertheless a magnificent symbol to capture the hunger and ruthlessness of William M. Tweed. In his early days as chief of the Sixth Ward Fire Department, Tweed selected the tiger as the department’s symbol. Nast capitalized upon the symbol and the tiger came to life. As a symbol for Tammany Hall, Nast launched Tweed’s tiger to eviscerate the Democratic boss.  In Nast’s Tweed series, the Tammany tiger embodies bottomless hunger and greed and an at-all-costs-protection of Tweed’s interests through violent enforcement. In 1871, Nast released The Tammany Tiger Loose.  It is an effective and emotional use of symbols.  In Colonial times, Benjamin Franklin, credited as America’s first political cartoonist, frequently used the snake to represent a strong and defiant United States.